In many ways, ancient Rome was the birthplace of modern Western culture. It’s easy to see ourselves reflected in its culture and customs, with its focus on liberty and the rule of law. In other ways, though, ancient Rome was more alien than we can imagine. For one, their addiction to bloodthirsty sports in which people died would repulse the average person today.

Ancient Roman cuisine is no different. Some things, like bread, wine, and olives, are widely used in modern Western cuisine today, while others, like their strong fish- and grape-based sauces and savory souffles, wouldn’t be on the menus of even the most experimental gourmet restaurants. In this list, we’re shedding some light on the dining habits of ancient Rome. 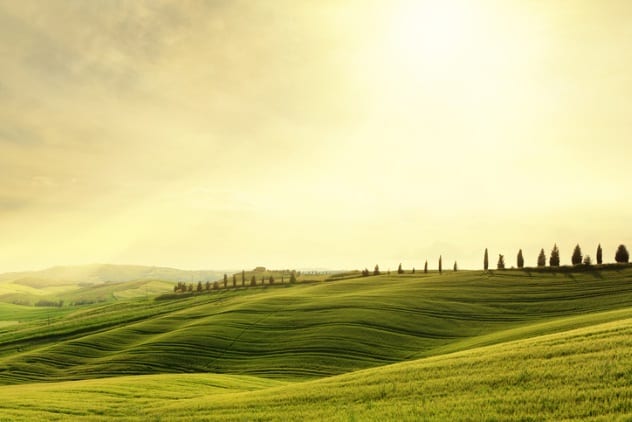 At its heart, ancient Roman food was built on three ingredients: grapes, grains, and olives. Scholars call these the “Mediterranean Triad.”[1] Grapes were eaten as they were, but they could also be made into wine of different qualities, from the vintage wines preserved for the elite down to the cheapest acetum, or vinegar, which was used in cooking but also for a wide variety of other purposes, such as extinguishing fires.

Grain was the dietary staple of everyone from richest to poorest. In wealthy households, wheat would be finely ground and baked into doughy white bread or made into fancy porridge with a variety of other ingredients. The very poorest of Rome were entitled to a free grain dole, which they would either take to a baker who would make it into bread or make porridge with it themselves in a pot of water.

Olives were essential for daily life—as a food, of course, but mainly as olive oil, which was used for everything from fueling lamps to washing after exercise. Without these three ingredients, Roman cuisine couldn’t have existed. 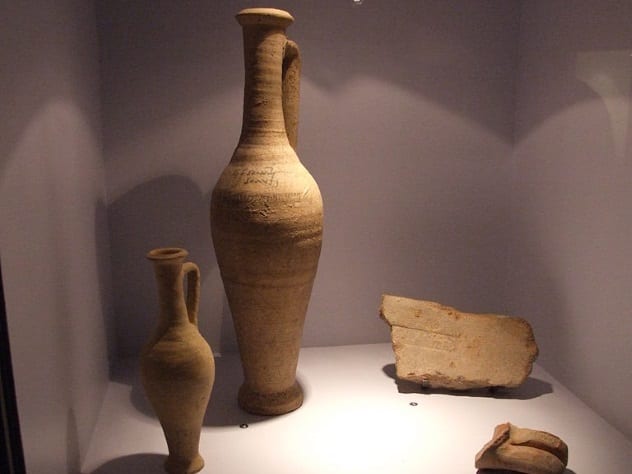 At the height of its use in the first century AD, garum was incredibly popular. It was frequently combined with wine, oil, ground pepper, and even just water to make a range of different sauces or drinks that could be consumed straight or added to other meals. Even the most cash-strapped laborer could afford basic garum, while the most advanced garum would bankrupt even the wealthy middle-class landowner. Factories dedicated to its production sprang up across the empire, and dedicated trade routes carried garum to its furthest reaches. But what was garum?

There is no direct equivalent in the West today, though the fish sauces of Asia come close. Wildly popular at its height, it faded with the fall of the Romans and drifted out of Western cuisine.

Even the simplest garum took a long time to make, though it wasn’t very labor-intensive. Essentially, garum was made by layering the innards of gutted fish between salt and aromatic herbs and spices. Left in the sun for months, the fish innards would ferment into a very pungent paste. The amount of salt was important: Too little salt, and the fish would putrefy; too much, and the fermentation process would be disrupted. The mixture would then be strained to produce the amber sauce that graced Roman dinner tables from the Middle East to Hadrian’s Wall. When the straining process was over, the paste that was left over was also sold as a food additive, though it wasn’t nearly as valuable.

Because garum was basically made from salt and the leftovers of the fishing industry, simple garum could be very cheap. The best garum, however, was made from particular types of fish and with particular combinations of herbs and spices, the recipes of which were closely guarded secrets. According to Pliny the Elder, the best garum was made on the outskirts of modern-day Cartagena, Southern Spain, and it was called garum sociorum. 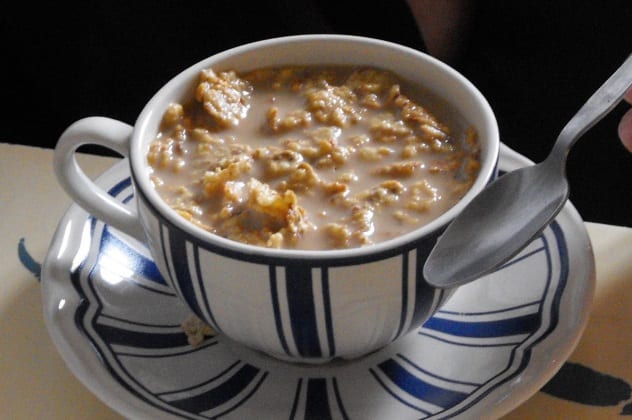 Grain was the staple of the Roman diet, and the easiest food to make from grain was puls, or porridge. At its most basic, porridge was simply grain boiled in water until the water reduced and the grain softened.[3] Salt was then added if it was available—unlike modern porridges, Roman porridge was nearly always a savory dish. More luxurious porridge, sometimes known as Punic porridge, would contain things like honey, cheese, and eggs and could form the basis of a nice, hearty meal. The very best porridge even had the luxury of added herbs and spices.

In the Roman army, food was prepared at the contubernium level—the unit of eight men who marched, ate, and slept together. The responsibility for cooking meals often fell to one or two men in the unit. And since the grain ration was distributed raw, soldiers usually made their ration into porridge, since it was hard to find time in the busy schedule of a Roman soldier to make bread. Because of this, porridge was stereotyped as the food of the poor and the army, so the richer class of Romans avoided it wherever they could. 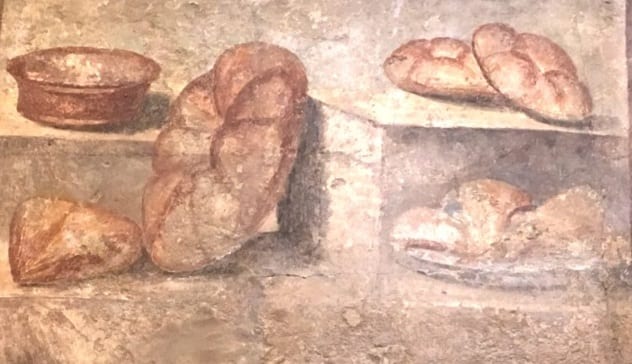 If porridge was the easiest Roman food to make, bread was the most common—especially in the later years of the empire, when the free grain dole for the poor was replaced by free bread. Bread was produced on an industrial scale in large bakeries, and the standard form was the panis quadratus, a circular loaf scored along the top to form eight slices.[4]

Archaeological explorations in the Roman city of Pompeii have turned up carbonized examples of panis quadratus as well as many wall frescoes featuring it in bakeries. Judging by the archaeological record, panis quadratus was a commonly eaten food item, at least in urban environments, where many people would have been buying their food rather than growing and cooking it themselves.

As for the recipe, it was not too far removed from how bread was prepared up until the modern era: The cheapest breads would have been very dark, while the most expensive would have been lighter, having been made from finer flour. Because flour was ground in a stone mill or quern, bits of stone would have entered the mix and worn down people’s teeth over time. As always, people had to be on the lookout for low-quality bread made from bad flour. In an effort to tackle this, bakers were required to stamp their bread with their own personal identifier so that they could be tracked down by the authorities if they tried to cheat a customer. 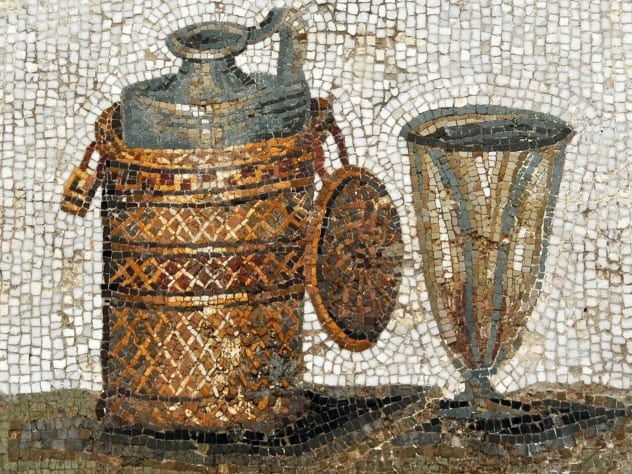 Winemaking was a giant industry in ancient Rome, and like all industries, it produced waste. In this case, the main waste product was wine that went bad or didn’t age properly, becoming vinegar or acetum. The Romans were good at repurposing their waste, though, and this vinegar was put to many uses. It was primarily used to make posca, a drink favored by the lower classes and the military for its availability and cheap price.[5] In military circles, it became such a standard drink that imbibing normal wine was looked down on or, in the case of armies in the field, banned entirely.

Drinking vinegar may sound disgusting, but it can be made quite palatable by adding a few ingredients. The cheapest posca seems to have been a mix of vinegar-wine and water, which must have been an acquired taste at best but was safer than drinking straight water. Higher-quality posca was made by adding honey and spices such as coriander, which would disguise the bitter, acidic taste of the acetum. 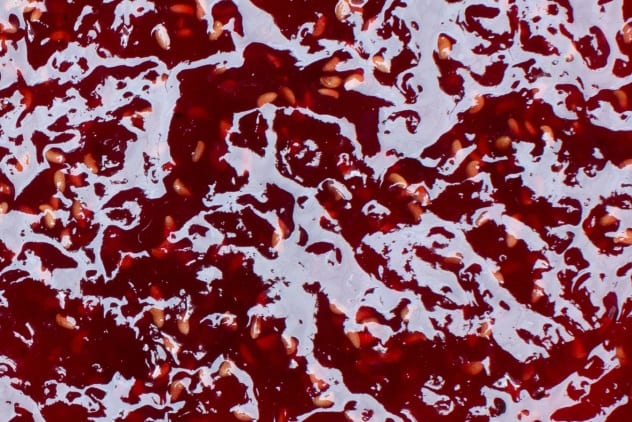 Alongside the spoiled wines and vinegar that the Roman wine industry inevitably produced, there were also the leftover grape skins, pits, and pulse that didn’t end up in the final product. Never being ones to waste potentially useful materials, the Romans used these leftovers to make a cheap sweetener called defrutum (sometimes spelled defritum).[6] There is some debate over the difference between defrutum and sapa, which were both made with grape must. Since the writer Columella seems to use the words interchangeably, it’s possible they were the same thing.

Defrutum was basically a cheap material that could be added to meals to bulk them out, giving them flavor and calories. It seems to have been quite similar to a modern-day jam or preserve: Ancient recipes describe adding the mix to a pan and cooking it until it turns thick and reduces by either a half or a third. Honey was a better sweetener, but it was also more expensive and only produced in certain regions, while wine was made in nearly all corners of the Roman empire. And while it may not have been the most desirable foodstuff, porridge with grape jam would have been much more enjoyable than plain porridge.

Which Banana Would You Choose? Your Response May Affect Your Health