Your hair is falling out.

While millions of people experience hair loss every year, the American Academy of Dermatology says if it begins suddenly, it could be due to an illness. Two possible underlying medical conditions are thyroid disease and anemia, both of which cause hair loss that can be treated and reversed.

You’re losing weight without trying to.

For some, the idea of losing weight without even trying sounds like a dream come true. But when this happens in reality, it could be a sign that something’s seriously amiss. Inexplicable weight loss is a symptom of stomach cancer, according to the American Cancer Society, as it could be the result of a loss of appetite or occur as a direct result of the disease.

Or you’re gaining a lot of weight—and you’re not sure why.

If you suddenly start gaining weight even though you haven’t changed a thing about your diet or exercise routine, it could be due to hypothyroidism. Because the thyroid hormone regulates metabolism, those who have underactive thyroid glands tend to have a low basal metabolic rate (BMR), which can play a role in weight gain, according to the American Thyroid Association.

You have a strange freckle or mole. 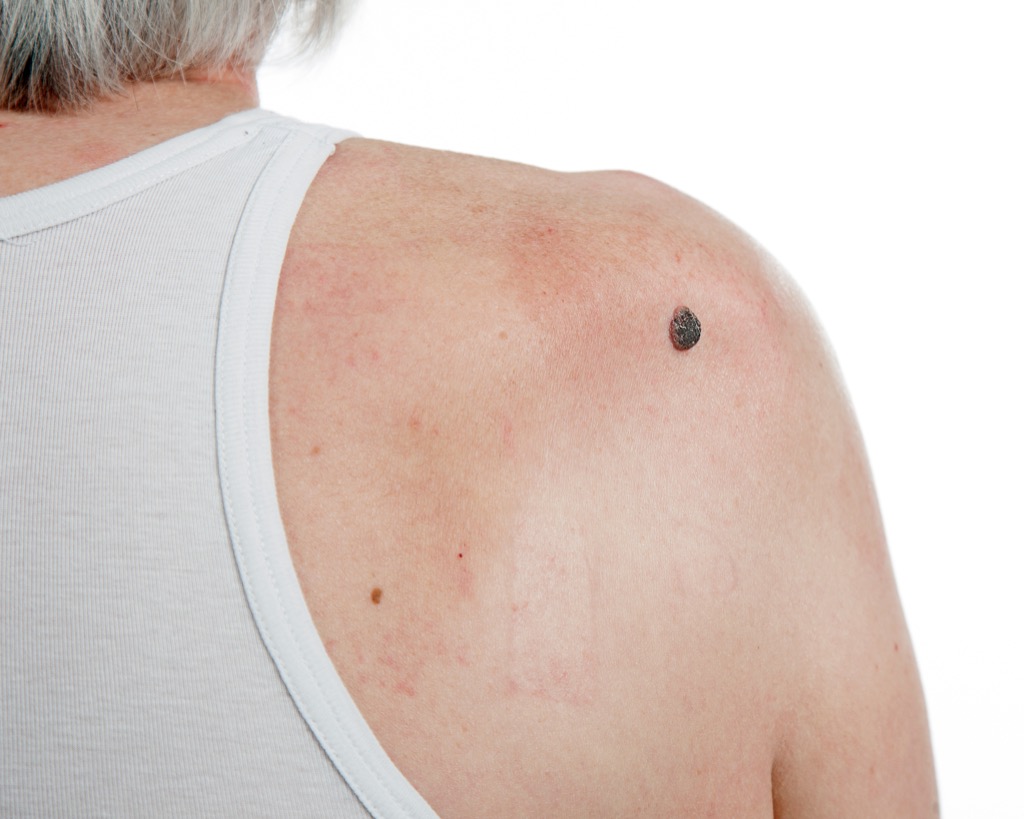 While normal moles and freckles are generally round and regularly shaped, spots that are asymmetrical, irregularly bordered, or are increasing in size could be due to melanoma, a deadly form of skin cancer, according to the Skin Cancer Foundation. That’s why performing a total body self-exam regularly is one of the most important things you can do for your health.

“Skin cancer is the most common cancer worldwide. In the United States, there are more new cases of skin cancer each year than all other cancers combined,” says dermatologist Keira L. Barr, MD, founder and chief wellness officer of Resilient Health Institute. “By simply ‘partying’ in your birthday suit every single month and looking for any ‘uninvited guests,’ you have the ability to save your own life.”

Your teeth are discolored and sensitive.

Dental erosion is often a subtle indicator of gastroesophageal reflux disease (GERD). “Oftentimes, patients are unaware they suffer from GERD because they don’t have pain. As dental professionals, we can identify the unique pattern that forms from acid being regurgitated back into the mouth,” says Inna Chern, DDS, of New York General Dentistry.

“The damage is usually to the upper front teeth on the palate side and the lower back teeth on the tongue side; the areas are very smooth and often discolored due to the enamel loss,” she says. “General signs of dental erosion due to GERD include sensitivity, discoloration, thinning enamel, jagged edges, tooth pain, and eventual tooth loss due to fracture and decay.”

You always have a bitter or sour taste in your mouth.

If you already know you have GERD, you’ll want to be on the lookout for Barrett’s esophagus, a serious complication of GERD that causes the lining of the esophagus to become irritated as a result of repeated exposure to stomach acid, according to Summit Medical Group. Take note it you have a bitter or sour taste in your mouth, as well as a hoarse or raspy voice and unexplained dry coughing.

Your fingernails are clubbed.

Nail clubbing—which involves the tips of your fingers becoming enlarged and your nails curving around your fingertips—could be a sign of lung disease. According to the Mayo Clinic, the symptom occurs slowly over time due to the low amount of oxygen in the blood.

Alzheimer’s disease wreaks havoc on your memory and mental functions, changing your behavior over time. One subtle symptom? Regularly losing things. Because of the disease, it becomes easy to forget where you put items, and oftentimes, they end up in usual places, according to the Alzheimer’s Society.